Dogecoin’s creator, who has quite interestingly become the best-known meme of the cryptocurrency world, recently ripped into the new LUNA ecosystem, LUNA 2.0, claiming it was made hastily to safeguard the failed Terra ecosystem and its millions of users.

Earlier this week, Billy Marcus, also known on Twitter as “Shibetoshi,” shared a tweet on his official Twitter account. In his tweet a few hours before the launch of LUNA 2.0, he wrote that it would serve as a perfect example of how foolish a certain number of crypto gamblers, or investors, are by launching LUNA 2.0.

According to Billy Marcus on Twitter, “Luna 2.0 will expose how incredibly foolish crypto gamblers are,” he expressed on the social network.

According to Marcus’ comments he implies that following the failure of Terra’s ecosystem, Investors in cryptocurrencies would never be able to trust the Terra team, he believes. 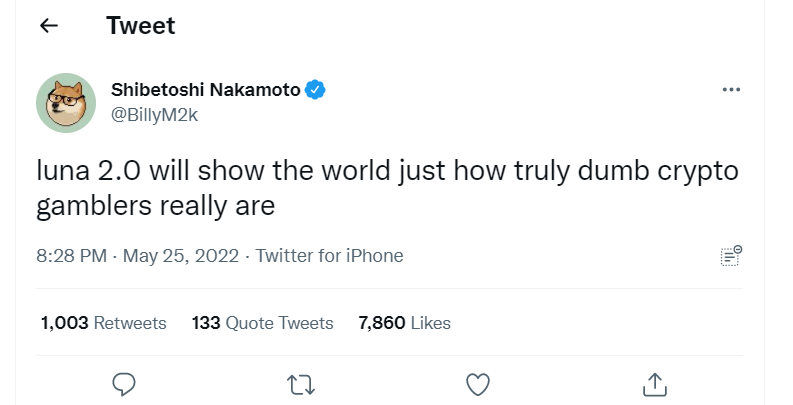 Terra is ready to launch a new blockchain and reintroduce the LUNA 2.0 token to its users.

On May 7, 2022, UST got depreciated and replaced by LUNA 2.0 tokens, which will be distributed to UST holders during an airdrop. The distribution process started on May 7. Additionally, Do Kwon has already won the vote for Terra’s leading team member for the new blockchain.

A portion of the LUNA 2.0 tokens will be awarded to users who have kept their UST or LUNA throughout the crash as a sign of their faith in the team. According to sources, Terra will rename its existing blockchain as Terra Classic after this process is complete.

The fundamental purpose of constructing a new blockchain is to provide an opportunity for those who were harmed by the failure of the first Ethereum network to make amends.

According to Do Kwon, “The aim for establishing a new blockchain was to complement the wider ecosystem created around Terra.”

Do Kwon recently said that “the distribution of UST [the terra stablecoin] has contributed to forming one of the best developer ecosystems in crypto.”

He also pointed out that UST has been “the key of terra’s growth story over the last year.”

Kwon explained that “the terra ecosystem deserves protection,” He named some of its most important projects, including Defi and Fungible Labour Markets.

Terra has had its ups and downs, but it still has a strong brand and a name that almost everyone in the globe is familiar with.

DO Kwon Criticized For Downfall Of Terra

Various people in the crypto world have criticized Do Kwon for the fall of Terra. He has also been accused of fraud regarding the Mirror Protocol, alongside the Terra scandal. He is also the subject of the Terra scandal.

Also Read: How To Add Custom Network In Metamask

Surprisingly, the accident led to an interest in the LUNA skyrocketing, with Google search popularity ratings skyrocketing due to the accident. After the crash, LUNA continued to lose money, with its market value falling below $1 billion.

The defunct cryptocurrency experienced a short-term surge in interest due to the additional funds that enthusiastic investors put into it. Market observers believe that the popularity of the token was attributed to the anticipation that it would follow in the footsteps of meme coins like Dogecoin, which had gained in popularity over the past few months.

The fact is that various crypto analytics companies tried to figure out what went wrong after the crash to come up with probable answers.