There is a possibility that Bitcoin could fall below $10,000. It would slash its market price in half, before rebounding to $30,000. The information comes from 950 investors who participated in the most recent MLIV Pulse poll. However, forty percent of investors discovered that it went in a different direction. On Monday morning, the price of bitcoin reached $20,474, which was a decrease of 2.4 percent from the previous day. 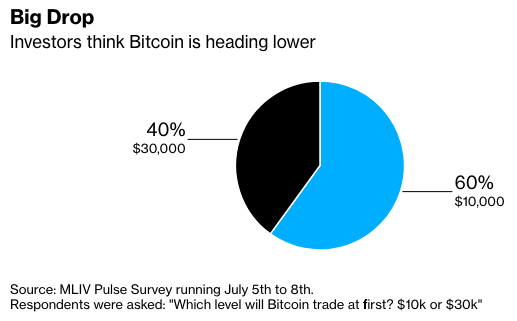 The cryptocurrency business has been recently plunging due to a number of factors, including failing currencies and unstable lending institutions. CoinGecko is the source of the information that the value of the cryptocurrency market has decreased by almost $2 trillion during the latter half of last year. Concerning cryptocurrencies, ordinary investors were more worried than their institutional counterparts. Also, some of the institutional investors even deemed the asset class to be useless. On the other hand, professional investors tended to have a more optimistic outlook about digital assets.

The observation shows that 28 percent of the total respondents had a high level of confidence about the financial future. On the other hand, 20 percent of individuals believe that they are worthless. After reaching about $69,000 in November, Bitcoin price has since dropped by more than two-thirds. According to Jared Madfes, a partner at Tribe Capital, it is easy to feel afraid right now in the cryptocurrency industry. Additionally, he said that any dip in the Bitcoin price may cause consumers to feel dread.

When the cryptocurrency market drops, it may put pressure on governments to increase their oversight of the sector. Several of the responders believe that this kind of monitoring is beneficial since it may boost confidence. As a result, both institutional and individual investors are comfortable with it. Consumers who lost money due to TerraUSD’s failure will be thankful for the involvement of the government. As a direct consequence of this, Celsius Network, the broker Voyager Digital Ltd., and the other middlemen have difficulties. To facilitate digital transactions, central banks create their own digital currencies.

On the other hand, analysts don’t anticipate any significant shifts in either the recent price decline or the prospective competition from central banks. However, a considerable portion of respondents believes that central bank digital currencies will play a more important role in the next five years, despite the fact that a large proportion believes these will continue to be a driving force.

A declaration by Ed Moya

Ed Moya claims that Bitcoin is the driving force behind key areas of the cryptocurrency space, while Ethereum is falling farther and further behind. In addition to being a broker of foreign currency, he is a senior market analyst at Oanda Corporation.

During the height of the cryptocurrency bubble, when it is at its most popular, NFTs, also known as non-fungible tokens, see values in the form of enormous sums of money for monkey photos. The vast majority of consumers think of their purchases as either artistic endeavours or status symbols.  While just 9 percent see them only as potential financial investments.

On the other hand, we anticipate that the vast majority of responders will choose the extended run-up. They are not connected in any way to cryptocurrencies, NFTs the forthcoming internet generation known as web3, or any other blockchain advancements.

According to Matt Maley, the next financial bubble will always be distinct from the one that came before it, and the important part will always be accurate. At Miller Tabak + Co., he serves as the company’s chief market strategist.

This Russian Bank Officially Launching its First DeFi Platform
Founder of Crypto Scheme My Big Coin to Serve Over 8 Years in Prison
Golden Ratio in Cryptocurrency Trading: In-Depth Look
Bitcoin Price Prediction as BTC Trading Volume Surges to $40 Billion – Here's Where BTC is Headed Next
This week in markets: Bitcoin remains above $23,000 while crypto stocks stay in the red